Supporters of the Socialist Equality Party (SEP) campaigned at the Ford Chicago Assembly plant Saturday, urging autoworkers to attend the International May Day 2015 rally against war, dictatorship and social inequality.

Ford workers, many of whom are paid the second-tier wage of $16 per hour introduced in the Obama Administration’s 2009 auto restructuring, expressed their strong support for the campaign. In particular they related the social interests leading the drive to war and those benefiting from the near poverty wages paid to an increasing share of auto workers. 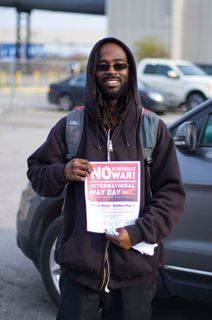 “Who benefits from war?” asked Lamar, a second-tier auto worker. “The rich. Just look at Iraq. There were no weapons of mass destruction. It was about oil.”

When campaigners urged him to participate in the rally, he replied, “I am very interested in attending. I agree with the message and think there needs to be an end to war.”

Steve, a 25-year-old auto worker, related the war drive of American imperialism to the aims of the corporate plutocracy. He noted the role of the United Auto Workers (UAW) union in policing workers, as well as the efforts of the media to promote identity politics to keep the working class divided.

“The wars are set up only for the corporations,” he said. “My brother has been serving in the military going on eight years. He’s been over in Afghanistan a few times and he’s been in Kandahar, Afghanistan. He’s home now.

“I talk about this to my partner a lot. We don’t benefit from the wars at home. Absolutely not. I only make $16 an hour here at Ford. People like me- we get screwed hard. And people like my brother in the military get screwed harder than I do. I was a firefighter for four years in Schererville, Indiana full-time before I started working here. They started cutting our pay, our wages, took away our benefits. EMTs and medics make so little. 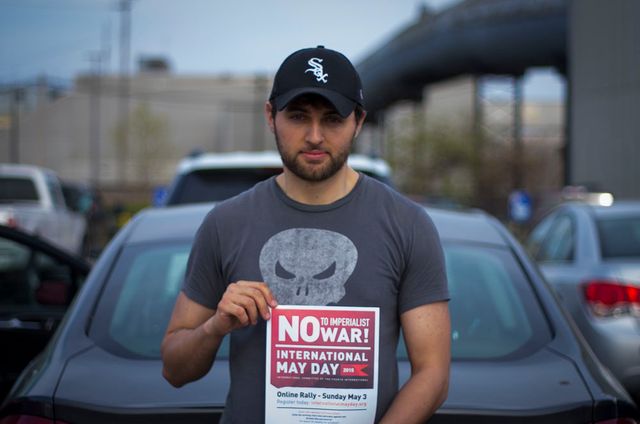 Campaigners spoke on the recent UAW bargaining convention, noting that while the UAW President Dennis Williams postured in opposition to the two-tier system, in reality he has been in talks with Ford and the other auto companies to create multiple new tiers with lower pay.

On that note, Steve added, “You guys hear about the situation at Lear? The subassembly plant? They threw a different name on it and said, ‘Two-tier’s gone!’ They’re making $11 per hour. A lot of people are afraid this is what is going to happen to us here at Ford with the contract. We’re talking about a strike coming, but we’re afraid it might turn out just like Lear.”

The campaign team noted that the attack on workers’ living standards is being conducted not only with the cooperation of the UAW, but with all unions. Reporters discussed the oil strike conducted by the United Steelworkers (USW) and how they limited the strike from the start to only a fifth of the refineries they represented in an effort to isolate the oil workers and force concessions on them.

“I’ve talked to people about the [oil] strike,” Steve added. “I’ve never been involved in a strike. I was in a union as a firefighter, but it was like it didn’t even really exist. I was talking to someone about how the USW was ‘strategically’ only shutting down one refinery here, one refinery there. But when you’re dealing with a big corporation like BP, it’s like throwing a pebble at a giant! If all of the workers went out on strike, it would have really affected the oil companies!”

Speaking of the warmongering of American imperialism in the Middle East and around the globe, he added, “The news and the media will tell us it’s our right to be there. It’s really not. It’s all lies. They’re not defending our nation. They’re only over there to profit, like Wall Street and all of the corporations. They’re the ones calling the shots.”

Campaigners also discussed the methods of war being used at home, from Ferguson to the rise in police shootings, including that of fifty-year old unarmed South Carolina man Walter Scott. “The shooting of Walter Scott was very unjustified,” he said. “The government and the media are saying it’s a racial issue with these police killings. And they want to keep us divided.”

On the recent leaked reports about the National Guard referring to protesters in Ferguson as “enemy forces,” he responded that the supposed reason soldiers signed up was “to protect the population. Now they’re enemy combatants? The government, the police, are doing whatever they want. They’re violating our rights. ” 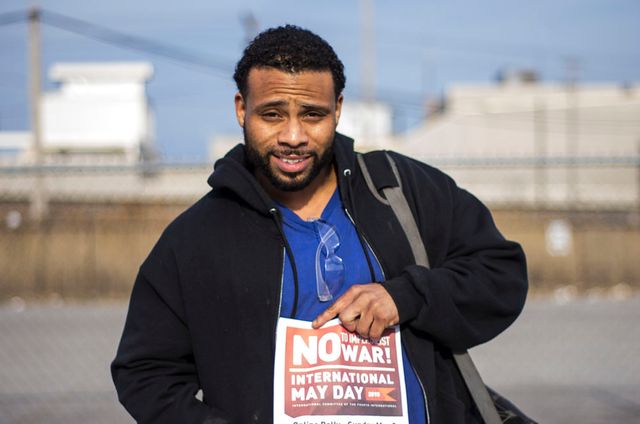 Alex, another second-tier autoworker, spoke about the stagnation of workers’ living standards. “Wages have been the same for forever. The rich are getting richer. In 2008, I was making the same amount of money I am now. And they want to reduce wages even further here. Both the Democrats and the Republicans are about the same; either way it doesn’t make a difference for us.” 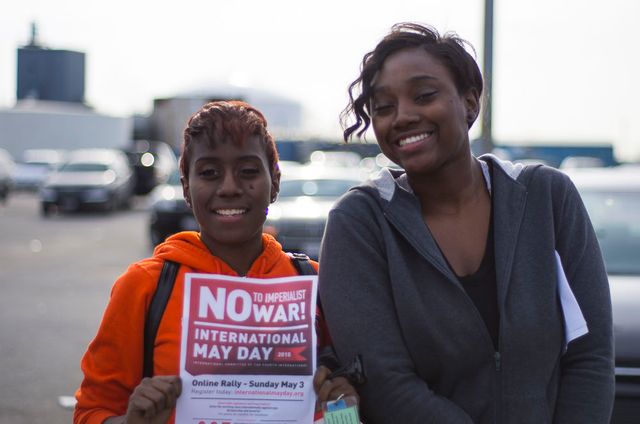 Eboni, also a second-tier worker, declared, “We have no interest in other workers in other countries being killed. We really don’t.”

Speaking on the conditions autoworkers face, she observed, “We have a ridiculous two-tier system here. We do the same work but get paid half as much as other workers. It’s not right.”

She concluded, “The corporations are making record profits, and CEOs are making millions in bonuses. And we can’t even afford the cars we make.”

Reclaim the revolutionary traditions of May Day! Fight for social equality! Defend democratic rights! Stop the drive to war! For the international unity of the working class!

To mark International May Day 2014, the International Committee of the Fourth International (ICFI) and the World Socialist Web Site are organizing a global online rally against inequality, dictatorship and war. We urge all workers and youth to register today to participate in this unique event, which will feature speakers from all around the world addressing the basic problems that confront humanity.

Donate to the WSWS